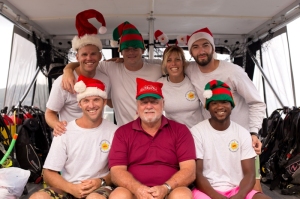 First of all we would like to wish everyone belated happy holidays…
And of course a fantastic new year!
We hope that this new year will bring you guys;
everything you wish for and even more!

With the start of a new year why not look back in the past and remind ourselves of one of the greatest scuba guys in history; Jacques Cousteau. Everyone’s hero, a man they looked up to and for us in the dive industry a pioneer to diving with a remarkable family still active in ocean conservation and education.

I assume most people know Jacques Cousteau, but for those who don’t let me explain; Jacques Cousteau was a diver, undersea explorer, researcher, photographer and lots more.

Most people know him from his TV series “The Undersea World of Jacques Cousteau” but there is a whole lot more to him than that. He was born in 1910 in the south west of France where he learned to swim at the age of 4. With that a curiosity of the underwater world was born.

One of the biggest things he did for the dive industry is invent the Aqua Lung, one of the first breathing apparatus for diving in 1943, which allowed divers to stay underwater for long periods of time. He also assisted in developing a waterproof camera that could handle the pressure of deep water.

In 1948 Cousteau undertook the first underwater archeology operation using self-contained diving apparatus. They went to find the Roman shipwreck Mahdia in the Mediterranean Sea. With that an era of underwater archaeology was begun.

In 1950 he started the French Navy’s undersea research group. With this group he started to explore the worlds ocean, on board a
leased British minesweeper which he converted into a research vessel, the Calypso.

As time went on, financing these expeditions became more and more a challenge and that is when he decided that he needed to make people  aware of exactly what it was that he was doing and why. So in 1953 he published his first book “The Silent World” which ended up an award-winning film later on.

He was passionate about the underwater world and wanted to explore and learn through expeditions which he filmed and made documentaries and series such as the most known Undersea World of Jacques Cousteau. While filming and discovering more and more about the oceans he realized how us humans were destroying what was (is) so important to us.

In 1973 after gaining more and more success he decided to found the Cousteau society; a nonprofit organization that is an advocate for the marine life with emphasis on environmental education and protection and improvement of the quality of life for the underwater world. With this his shows would become more and more environmentally minded with a strong message to protect the oceanic wildlife habitat.

Unfortunately he passed away at the age of 87 in 1997 while he was trying to raise money to build a new vessel after the Calypso sank in 1996.

Most of the Cousteau family continues his efforts to raise awareness. Jean- Michel Cousteau, Jacques son, founded Ocean Futures Society in 1999.   Ocean Futures society is a nonprofit organization with its goal to explore our global ocean, inspiring and educating people throughout the world to act responsibly for its protection, documenting the critical connection between humanity and nature, and celebrating the ocean’s vital importance to the survival of all life on our planet. Phillip Cousteau, together with Alexandra Cousteau, grandchildren of Jacques Cousteau and children of the belated Phillip Cousteau founded Earth Echo. Earth Echo is a nonprofit organization with its mission to empower youth to take action that restores and protects our watery planet.

What many people don’t know is that the Cousteau family was good friends with Bert Kilbride, the same one who was the pioneer to diving in the BVI. Jean Michel Cousteau organized Project Ocean Search, organizing dive expeditions all over the world. He brought the group down to stay at Drake’s anchorage, Bert Kilbride’s dive shop at Mosquito island. One of 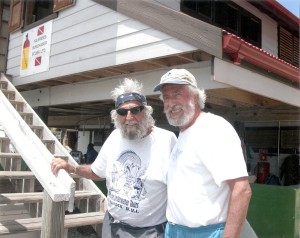 our current dive sites is called POS, after Project Ocean Search. Bronco Billy one of our other dive sites in the Dog Islands is rumored to be Jacques Cousteaus favorite dive in the BVI.

Kilbride led divers on a hunt for artifacts that could help recreate the history of a wreck. ”Cousteau came back every year for 10 years, until his crew held a mutiny and demanded change,” Kilbride recalls. ”He said we were the only operation where he signed up for 20 dives and got 20 dives. I was up all night, filling tanks with an old Volkswagen engine.”

Later on, Cousteau returned after that even though he always said he never went anywhere twice. The reason: It was the first place that he got every dive that was promised. It went on for 13 years…

Be sure to check out the Cousteau organization on www.cousteau.org or find out more about the man himself on his biography page; Jacques-Yves Cousteau. [Internet]. 2014. The Biography.com website. Available from:http://www.biography.com/people/jacques-cousteau-9259496 [Accessed 11 Dec 2014].