For almost a year and a half now we have been a proud part of the AWARE movement. For every student we certify we donate a fixed amount to Project AWARE. In return, our students get an amazing Project AWARE certification card. So after a recap what Project AWARE is and does it is time to have a look at what has happened on that front in the past year.

Project AWARE is a nonprofit organization built out of scuba divers who want to protect our ocean planet. What they found over the past two decades is that divers are true leaders in ocean protection. “We’re ocean heroes numbering in the millions across the globe.” All of us together and our actions will make a huge impact and will help rescue the ocean.

They have different programs and online resources to help and mobilize divers and their communities to protect our ocean and implement changes that will last. The two major ocean issues they focus on are “Sharks in Peril and Marine Debris”.

Sharks are the top predator in our oceans and for years they ruled the waters we all love. However over the years due to human behavior, nearly 200 species of sharks and their close cousins’ skates and rays are currently threatened with extinction.

Mostly because of over fishing, for their fins and meat, but also as “by-catch’ when they get caught in long lines or fishing nets. Despite the drastic decline in the numbers of most sharks and rays, fisheries are unregulated and very few have limits. An estimated 100 million sharks are killed each year in commercial fisheries.

Due to the nature of these animals they have a hard time keeping up with the over fishing to repopulate. Most of these amazing creatures mature very slowly, bearing few young and also give birth to live pups.

Luckily  more and more people are starting to realize that something has to be done. We, here in the BVI, our proud to say that the British Virgin Islands is one of the few Shark Sanctuaries in the world. Only Bahamas and Honduras joined in on the initiative prior to us here in the Caribbean. On 22 May 2014 the BVI made the official announcement.  From that day on commercial fishing of all shark and ray species is prohibited in an area that covers nearly 31,000 square miles of water and it also prohibits the sale and trade of shark products on the islands. After our example other Caribbean islands such as Dominican Republic, St Lucia, Puerto Rico, have committed to become shark sanctuaries by May 2015.

Worldwide actions are being taken to protect these amazing creatures. US President Barack Obama has agreed to expand a vast marine reserve in the Pacific Ocean. With that the Pacific Remote Islands 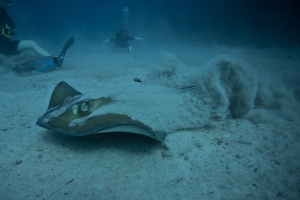 Marine National Monument as they call it will become the largest network of oceanic protected areas in the world.  The area consists out of 7 scattered islands, atolls and reefs that lie between Hawaii and American Samoa. In this area there will exist a ban on commercial fishing, deep-sea mining and other extraction of underwater resources. When the area was originally set up as a reserve it was only 50 nautical miles around the shores. With the expansion now 200 nautical miles of the shores an area roughly 3 times the size of California will be protected.

In the meanwhile in Quito, Ecuador, 21 species of sharks and rays made it to the list of CMS Appendix I. With these listings, member countries agreed to grant a strict protection to the reef manta, 9 devil rays and 5 sawfish. They also agreed to work internationally to conserve all 3 species of thresher sharks, 2 types of hammerheads and the silky shark.

Next to rallying for sharks Project AWARE and divers all over the world also want to raise the awareness about the ever growing marine debris challenge in our oceans. They challenge to take local action and supporting the policy change necessary to prevent and reduce trash entering our waters. There is a global underwater survey of marine debris. The trash removed from the ocean also forms a safer environment for the marine life living in it. All the gathered information will help to make a report to bring to individuals, governments and business to make these act against the trash in our oceans.

Project AWARE proudly announces the amazing accomplishments they have made in 2014. We’ve:

So all of us, heroes of the oceans, should do whatever is in our power to contribute making these waters we all love a better place for the amazing creatures living in it. From picking up trash during your dives, making sure you don’t throw anything in the ocean, sign the petition or make a donation… Every little bit helps! We know we would love to do a lot more then what we are already doing and we all have our own excuses and reasons why we can’t. Just remember little by little and every little bit helps!