16 June 2017 is World Sea Turtle Day so what better to write about for this months blog?!
Turtles are amazing and everyone loves them. So let’s see what we can find out about these wonderful animals and what we can do to help them! 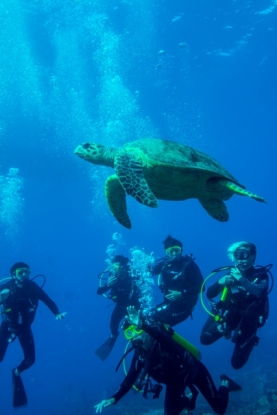 When is comes to sea turtles, there are 7 different species. The ones we have here in the BVI are mainly Green and Hawksbill turtles. Ocasionally we spot Loggerhead turtles and even rarer the massive Leatherbacks. Next to the ones that we see here, the Kemp’s Ridley, Olive Ridley and Flatback turtles belong to that list of turtle species.

This is one of the oldest animals around and scientists believe that they have been around for 100 million years, making them as old as dinosaurs. The biggest difference from their friends on land is that they can’t retract their head and flippers.

Although they are all similar, they do have some differences. One of the differences is what they eat. Green sea turtles love to eat sea grass, whereas Leatherback and Hawksbill turtles eat jelly fish. One day, Ben and Shon jumped in for a dive at Coral Gardens when there were hundreds of moon jelly fish. With them, the Hawksbill turtles showed up and they were having a jellyfish buffet down there. Going from one jelly fish to the next… 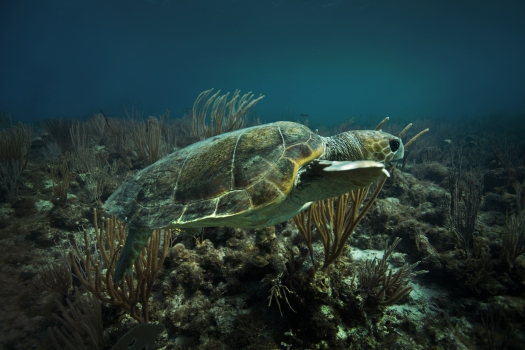 Even though we love snorkeling and skin diving, compared to sea turtles, we are pretty bad at it. The record for underwater breath holding is around 24 minutes. Sea turtles come and show off and they can hold their breath between 4 and 7 hours.

Next to that they also have an amazing sense of direction. They return to the same beach every year to lay eggs. They can sense the magnetic field of the Earth and use this as their compass to navigate through the oceans. They are so good that they can come back to within 100 yards of where their nest was the previous year.

It is the location of these nests that will decide the gender of the baby turtle. Or at least the temperature of the nest to be more accurate. Warmer nests lead to more girls. Due to climate change this is becoming a problem though, getting too many females and not enough males.

This is not the only problem for these amazing creatures though; Over fishing, illegal trade and consumption, habitat loss and climate change all contribute to the decline in the turtle population. That is why it is so important that we celebrate these amazing animals and make everyone aware that unfortunately most of these incredible creatures are endangered.

There are a lot of things that even we can do, such as contribute to non-profits who are trying to save these animals. Go and volunteer with turtle nesting as a beach patrol or why not adopt a turtle.

We will be celebrating our World Turtle Day a little later this June and we will do so with one of our Turtle Tagging Expeditions on 20 June here at Bitter End Yacht Club. For the 6th time this season we will be heading out with marine biologist Dr. Shannon Gore. Dr. Gore starts the day with explaining a little bit about turtles, how we will look for them, how we will catch them and how we will release them.

It is such a great experience and a great way to get in the water with these beautiful animals, maybe even catch one and to be able to contribute to the research.

All proceeds of the excursion go directly to the non-profit organisation ARK so they can continue to tag and track these sea turtles in the BVI. By doing this we can keep on learning about them so we know what to do to protect them.

If you aren’t here for the World Turtle Day, then maybe you will be here for World Oceans Day! Same as last year, we will be teaming up with the Bitter End Yacht Club staff from the Quarterdeck Club to celebrate World Ocean’s Day on 8 June 2017. As per tradition we will be doing a shoreline beach and underwater clean up. If you would like to join us, snorkeling, diving or assisting, just give us a shout and we would love to have you help us help our ocean! 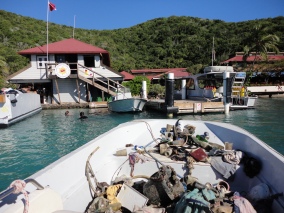