For this month’s blog we will go back in time and have a look at some of the older equipment people used when they went diving.  Some of them we actually have in our hands here and some of them have seen better days. 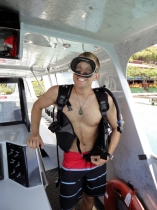 Scuba diving has been going on for decades. It started as free diving for food or treasures which then slowly changed into diving with surface supplied air to the diving as we know it. Military and discover diving become more and more popular and thanks to people like Jacques Cousteau and shows like Sea Hunt and movies such as The Deep more and more people wanted to dive.

More and more people started to dive and it needed to become regulated in some way. Dive companies were founded, dive clubs organized themselves and scuba diving became a safe sport, open to almost anyone. Over the years, the sport of diving, depths, equipment, locations and whatever belongs to it has seen an incredible change and improvement.

One of the first inventions important to scuba diving happened in 1940. Owen Churchill started producing swim fins. At first they had a slow sale rate, but once the market got to know them tens of thousands got sold to the Allied forces. His fins remain popular with body boarders and bodysurfers. After that fins have changed many times in style, from full foot to open heels to split fins. The latest research recommends going back to the old jet fins with wide blades, made out of flexible material for efficient kicks.

One of the main pieces we need when diving is a mask. The masks as we know them, which include your nose in it, were invented in the 40’s. It wasn’t until the 80’s the reduced volume would come into play though. Older dive masks had a single pane of glass with indentations underneath, either side of the nose. You would have to reach under the glass in order to pinch your nose and equalize your ears. Over the years they improved this design by bringing the window closer to the face, and over time they would make a cutout to fit over the nose, making it easier to clear.
After that they went from 1 window to 2 windows. With this change the windows can be closer to the face, meaning even less space to blow water out if your mask leaks. These days the low volume mask is very popular. Newer developments involve side panels for a wider vision…

Of course we do need a regulator when we go diving, it makes quit a difference when you don’t have to hold your breath! One of the first regulators to come out was the twin-house or double hose regulator which we have to thank Jacques Cousteau and Emile Gagnan for! They invented the C45 Scaphandre Autonome or better known as the Aqua-Lung.
This regulator had 2 large breathing tubes, one to supply air to the mouthpiece and one for the exhalation. It would not be used as a rebreather, but as a way to vent the air when breathing out. These regulators became obsolete for most divers in the 80’s, but it has reappeared in modern rebreathers.

When people first started diving they would not wear any bcd’s. It was hard because you needed extra weight to get down, but once down you could not compensate for the gain in buoyancy when the tank became more empty or when you were too heavy you just had to swim up and maybe even ditch your weights. The first bcd was called a Horse Collar bcd which looks very similar to today’s snorkel vests.

They were front mounted and were only operated by oral inflation. Back in the 70’s some would have a CO2 cartridge for emergency inflation. You would wear a separate backpack with harness to hold the cylinder. The AT-Pack back pack was the first one to integrate the back floatation bcd with a low pressure inflator. In 1971 Scubapro introduced the Stabilization Jacket which was the first jacket style bcd.

One of the items we recently discovered hidden away in our office is an old video camera with strobe!
Looking like a big square box, where you would put your video camera in, it did the trick…

We also have the Orca Edge in our possession. The Orca Edge was introduced in 1983 and was the first commercially available dive computer. After that a dive computer of course became a more common piece of equipment, which almost everyone has or uses these days.

More and more people dive and as they do changes keep happening. Technical diving, pushing our limits, evolving, updating and hopefully improving whatever we know. This knowledge is good and will hopefully teach people about our ocean and how much we need it and the life in it. As a diver we are ambassadors of the underwater world, only we can tell stories of what it looks like down there and tell others why they should treat it with respect!